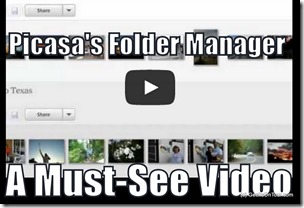 This is probably the number one, most basic, most important thing to know about PIcasa and yet, the great majority of Picasa users don’t have a clue!  On our GeeksOnTour.com website we have over 90 tutorial videos on using Picasa. I think the one on Folder Manager may be the most important one, so I’m making it free for anyone to watch here:

The other day, I was helping a friend look at some pictures which were sent to her via email. First I showed her how to get them from her email program to her computer’s filing system. I told her to just right-click and download the pictures, then navigate to the C:My Pictures folder and make a new folder there to store them. She told me no, she was now keeping all pictures in the C:OneDrive\Pictures folder because she likes how OneDrive backs everything up to the Cloud.

OK, Fine. The pictures she received in an email are now in her C:OneDrive\Pictures\MountainPics folder.

The best way to view pictures is by using Picasa … DUH! So we opened Picasa, but those new MountainPIcs weren’t there. In fact, none of her recent pictures – stored in the C:OneDrive\Pictures folder were there. This made perfect sense to me because I understand Picasa’s Folder Manager. We just had to tell Picasa about this new location for photos.

Now we see the mountain pics, and all other picturess in the C:OneDrive\Pictures folder.

To learn everything there is to know about Picasa, become a member of Geeks On Tour and watch nearly 10 hours of tutorial videos on Picasa alone!