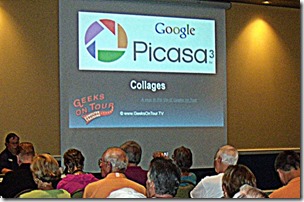 Did you know we have over 200 Picasa tips on this PicasaGeeks.com website? This is where all of our Picasa Tip of the Week articles are – you can sign up for email notification by entering your information in the sign up form in the right sidebar of this page. Every once in a while I browse thru them and read a couple. Whenever I do, I say to myself, Wow! That’s a really good tip! So, this week, rather than writing a new tip, I’m giving you a list of 20 of my favorite tips. Most all of these tips take you beyond the basics of Picasa. Read thru a few of them and you’ll start to understand some of the power that exists in this free program. In no particular order, here are 20 of my favorite Picasa Tips:

There’s lots, lots more! Check out the page that lists ALL our Picasa tips in alphabetical order.

Picasa is easy, but it’s not foolproof.  It’s important to take some time up front to learn how it works.  There are 5 things I keep seeing people do with Picasa that are wrong.  Because they don’t have a good foundation of understanding the program, they use tools the way they *think* they work, rather than learning how they really work.  The results is a mess.

Although Picasa is easy to use, it is SO important to understand how it works.  A little up-front time spent learning will save you so much time in the long run.  We have lots of resources to help: