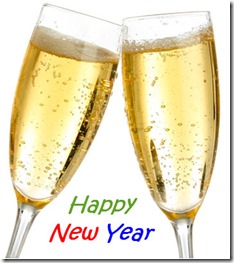 2/12/16 NEWS! Google is retiring Picasa. March 15, 2016 the Picasa Desktop Software will be discontinued (if you already have it, you will see no change.) May 1, 2016 Picasa Web Albums will go away (all photos and videos in Picasa Web Albums are already accessible by Google Photos.) Read the official announcement here. Keep a watch on this site – we will write more later in the week when the dust has settled.

It’s been a weird year for Picasa. Google owns Picasa and Google is constantly changing stuff, yet the Picasa software had basically no changes at all. This is both good news and bad news.

We are currently on Picasa version 3.9 and that was first released 5 years ago! We did get one minor Picasa update in September where they changed the words on the Share Button.

This change made me very happy because it tells me that Google has not forgotten about Picasa and they consider it part of their photo toolbox along with Google Photos. However, other than the words on the buttons, nothing else has really changed. When you upload a picture to Google Photos using Picasa, it resizes your photo with its old size limit of 2048 pixels per side, that’s about 4 MegaPixels.  If you use the newer Google Photos backup, or upload directly from your smartphone, you can now upload High Resolution files – up to 16MegaPixels.

Note: There is now a workaround for Picasa’s size limitation by uploading at Original size, then later using the Google Photos command to “Recover Storage” and it will resize all original photos online to the free 16Mp. But, my point is, they haven’t updated the Picasa software to the new standards.

Google Photos was announced at the end of May. It is a brand new product for Google, built from scratch to be useful in a world where pictures are being taken by phones and viewed on a tablet. Google envisions a world where computers don’t exist anymore. For most of us this is still a ways in the future. In my experience the future keeps arriving faster and faster, so I have embraced Google Photos and am having great fun with its new features. See our web show on Sunday, Jan 3 where our beginner’s lesson will be on How To Make Movies with Google Photos.

I still like having pictures on my computer and I still like using Picasa to work with them. I think Google understands this and has no intention of taking Picasa away from us, but it is way down on their todo list to work on any improvements for it.

Picasa Tip of the Week Newsletter

I’ve been writing a Picasa “Tip of the Week” for this blog regularly since 2008, and, for many years it actually was a weekly article. You may have noticed I’ve slowed down lately. With over 250 articles written already I’m running low on new things to say about Picasa. We recently changed the header of this website to include Google Photos in addition to Picasa.

According to my annual report of blog activity, there’s still plenty of people interested:

The busiest day of the year was August 29th with 8,988 views. The most popular post that day was Google Photos Announcement–This is BIG.

I’d really like to know what you all are doing with your pictures. Answering just 3 questions will help me put together newsletters that are worthwhile in the year to come. 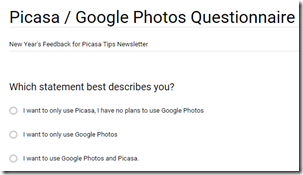