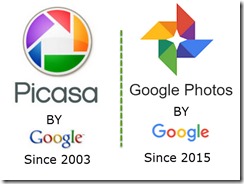 Here’s a 7 minute video on what I think is so special about Google Photos:

18 Responses to “Picasa and Google Photos: What is the Difference?”