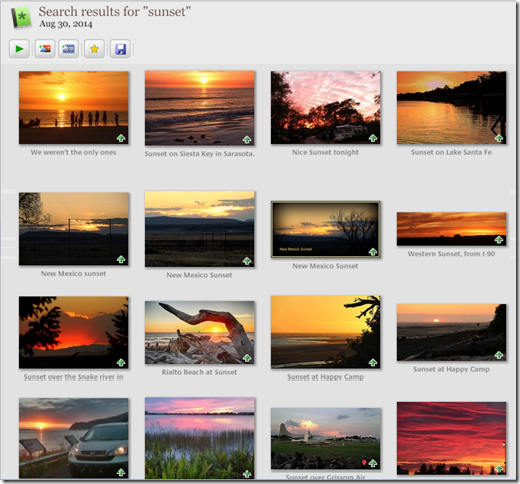 I’ve been taking digital photos since 1998, and I’ve scanned many old family photos from before that. It’s over 50,000 pictures total. That’s nearly 200 GB of storage space needed. I like having all of my pictures available for searching with Picasa. When I ask Picasa to look for “sunset” I see 234 pictures in the results. The most recent picture is from last week, and the oldest picture is from April 2001. And, I got those results in a fraction of a second! Does that mean that all my pictures are on my computer’s internal hard drive?

Most of them are on a USB external hard drive. My new laptop computer is a Lenovo Yoga 2 Pro. It’s sleek and it’s fast, it uses a solid state hard drive, you may have seen it designated as SSD. That means the hard drive is more like a flash drive than a traditional computer hard drive. That keeps it light and very fast. BUT, it’s small. Where computer hard drives were getting up to a standard size of 400 GB or more, my computer’s hard drive is only 220 GB. If I put all my pictures on it, I wouldn’t have room for anything else.

Here’s how I do it. I only keep the last year’s worth of pictures on my computer. Over 48,000 of my pictures, are on a 500 GB USB External hard drive. Then I use Picasa’s Folder manager to watch them there. (see Tutorial Video: Folder Manager #233) Think of it like Picasa is ‘spanning’ your computer and the attached USB drive to give you your complete photo library.

This is different from a backup on hard drive. A backup set are pictures that are stored safely away in a cupboard and only touched when you’re making a new backup. These are the pictures I am working with on a day-to-day basis. Some of them got there originally by copying from old backup disks even before I used Picasa. And, some of them got there from Picasa’s “Move Folder” command. (see Tutorial Video: pics19.Move Folders of Pictures to an External Drive membership required)

At the end of each year, I move each folder of pictures from the computer to the External hard drive. You simply right-click on the folder using Picasa, and choose “Move Folder …” When prompted where to move it to I navigate to my hard drive and the Pictures folder. 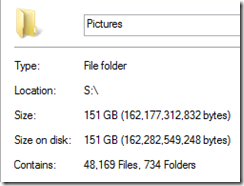 Assign a Letter to your Hard Drive

There is one issue with this process and that is when you unplug, and re-plug in your USB hard drive. When you unplug the drive, Picasa can’t see the pictures. No problem, they just disappear from your library. When you plug the USB drive back in, you want them to instantly re-appear. That is exactly what will happen, IF the USB drive has the same drive letter as the last time it was plugged in. This may or may not be the case depending on what other drives you have connected. If it has a different drive letter than the last time, Picasa thinks it’s a different drive, and it will re-scan it, taking lots of time.  The way to be sure that it has the same drive letter is to use your Windows Drive Manager to assign a permanent letter, like P – for Picasa! Here’s a video that shows you how.

15 Responses to “Store your Pictures on an External Hard Drive”