If someone sends you a picture attached to an email and you double-click to open it, do you see an option to “Edit in Picasa?”  If so, that means you are using a separate program called the Picasa Photo Viewer. 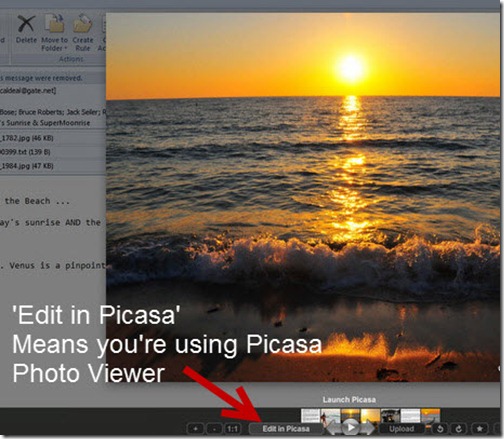 As handy as it is, it is even more confusing to most people.  You see – the picture is still coming from the email.  Photo Viewer is just letting you get a peek inside.  Clicking on ‘Edit in Picasa’ makes the Photo Viewer save the picture in a temp folder.  Picasa will show it to you while you make some edits, but then it will seem to disappear later because the Temporary folder where it is stored is not part of Picasa’s watched folders. 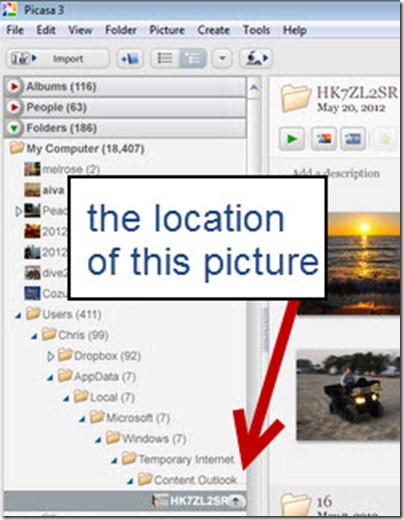 Don’t Use Photo Viewer.  My number one suggestion for dealing with the confusion of Photo Viewer is simply to turn it off.  In Picasa, click on Tools, then Configure Photo View and click on the option to “Don’t Use Picasa Photo Viewer.”  This means that, the next time you double-click to view a picture from an email, you won’t have the option to Edit in Picasa.  You will be forced to save the picture to an appropriate folder that is being watched by Picasa in order to edit it.  That’s very easy – just right-click on the picture and find the Save As option.  If you save the picture to a folder that is being watched by Picasa, then the next time you open Picasa you will see that picture.  (see member video: Receiving a Photo attached to an Email)

Move the picture to your desired Folder.  If you like Picasa Photo Viewer and you don’t want to turn it off, then I recommend paying attention whenever you use the “Edit in Picasa” option.  Realize that the picture you’re seeing is in a Temporary location and move it to a better location.  Simply drag the picture to a folder at the left where you want it.  If you need to make a new folder for this picture, then you right-click on the picture (from Picasa’s Library View) and choose “Move to New Folder.”

Geeks on Tour Members should watch the 8 video short course on Organizing Your Pictures.  “Move to New Folder” is covered in the video #5.