Last month it was announced that Picnik – the online photo editing software that Google bought in 2010 – was closed.  No more could you enjoy the special tools it brought to the table like framing your pictures or adding ‘stickers’ (little clip art) or wrinkle removal, or shine-be-gone.  Picnik fans were very disappointed.

But wait … reports of Picnik’s death may have been greatly exaggerated!  Have you noticed the extra 2 tabs of effects in Picasa 3.9?  Most of those features were taken from Picnik.  And, if you use Picasa Web Albums, or Google+ to share your photos online you have the online editing features called ‘Creative Kit.’  Creative Kit is Google’s reincarnation of Picnik – for Google photo products.  They’ve reorganized it, streamlined it, and made it faster. 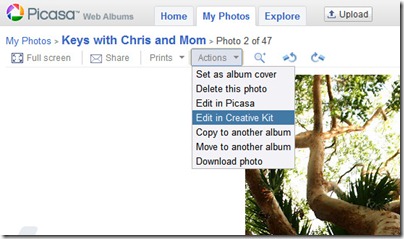 The surprising thing is that the Picasa desktop software still has an Edit in Picnik button – and it works!  It sure looks exactly like Creative Kit to me (the 3 stars is the logo for creative kit), but all the labels still read ‘Picnik.’  So, if you have resisted upgrading to Picasa 3.9 because you didn’t want your ‘Edit in Picnik’ button to go away – fear not!  It is still there, and it works better (faster) than ever.  (5/17/12 note: I just downloaded the latest update to Picasa and the button now correctly reads “Edit in Creative Kit” – that’s build 136.02) 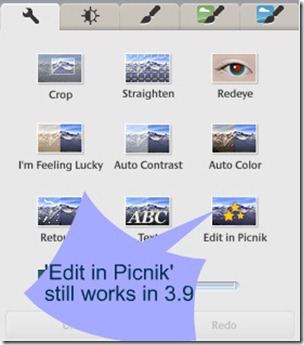 It doesn’t have all the features that Picnik had. For example, I know a lot of people liked the special redeye removal for furry friends – I can’t find that feature anymore. But, other things, like ‘Wrinkle removal’ have just changed names … it’s ‘airbrush’ now. And, ‘Teeth whitener’ may be gone, but you can accomplish the same thing with ‘Face Paint’ using the white color and a high level of transparency.

6 Responses to “Is Picnik Really Dead?”