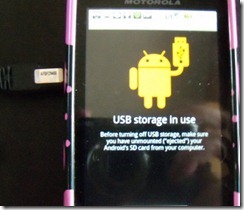 I love my Droid, I now take the majority of my pictures with my Droid smartphone.  This article is about how to import them to your computer.  It’s a lot simpler than you might think.

Plug the Phone into the Computer via USB

The cable that came with your Droid phone for plugging in an electrical outlet, also doubles as a USB cable.  Simply detach the cord from the wall plug, and you’ll see that it’s a USB cable.  So, plug the large end into your computer’s USB port and plug the other end into your phone.  You should see a USB symbol

at the top of the screen in the phone’s notification area.  If you drag that notification area down and touch ‘USB Connected’ and then ‘Turn on USB Storage’, now your phone should show up on your computer as a drive with a letter like F: or G: or higher.

At least this is how it works on my Droid phone.  I have the original Motorola Droid – now known as the Droid 1.  Your model may use some different words, but the procedure should be the same. (Tutorial Video: Importing Pictures from an Android Smartphone)

Your Phone becomes like any other USB drive or Camera Card

Be sure to specify what folder you want them imported to, and what to do with the pictures on the phone – just like importing from your other cameras. (Tutorial Video: Importing from Camera)

2 Responses to “Picasa Tip: Import Pictures from a Droid Smartphone”