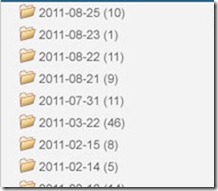 My friend Jimmy showed me his Picasa Library and pointed to the list of folders on the left side, “I don’t want my pictures in folders for each date,” he said, “how do I change that so the pictures are in folders by names that I tell it?”

Does your folder list look like Jimmy’s?  If so, that tells me that you’re letting Picasa import with the automatic date option.  Rarely do I see anyone who wants to store their pictures this way, so let me first tell you how to avoid it in the first place, and then how to rearrange the folders that are already done.

When you use Picasa’s import tool to bring in photos from your camera, you have two fields where you specify the location for imported pictures.  The first filed is labeled, “Import to:” and the second is “Folder title:”  What I think you should see is like the image below.  The Import to: field is showing ‘My Pictures’  and the Folder title is blank.  This allows you to type in a Folder title of your choosing.  Picasa will create that folder and import you pictures to it.  Whatever folder name you specify will be created within the My Pictures area.

However, there are other choices.  If you click the dropdown arrow on the Folder title field, you’ll  see ‘Enter Folder Title’ ; ‘Date Taken’ ; ‘Today’.  So, there are 3 choices.  I advocate using the first one “Enter Folder Title” that is what gives you the blank field above where you can create any folder you want.   If you choose ‘Date Taken (YYYY-MM-DD)” then PIcasa will create a folder for each day that pictures exist, and it will import pictures into their respective folders.  If that’s what you want, it’s a *very* handy option.  But, so many people don’t realize that the daily option has been selected when it’s not what they want.  Just click on the dropdown arrow and select ‘Enter Folder Title’.’

The next time you use Picasa’s import feature, it will come back to whatever Folder Title option was used the last time.  At the last update to Picasa, this option was the default and many people didn’t know that it could be changed.

Ok, so now you know how to specify your desired folders for importing pictures from now on, but how do you combine and rename some of the folders that already exist?

Step one – rename one of the folders: in Jimmy’s example at the beginning of this article, there are 4 folders (8/21, 22, 23, and 25) that were all from one trip.  He wants all those pictures in one folder called August New York Trip.  Just double-click on any one of them – you can choose the first one, or you can choose the one that has the most pictures in it – and change the name.  Double-clicking brings up the folder properties and you can change whatever you want, in this case the name.  Just backspace over the existing name and type in what you want. 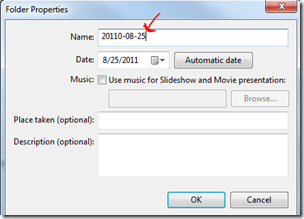 Step two – move all other pictures into the correctly named folder: So now you have one folder named ‘August New York Trip.’  Now you need to visit each of the other dated folders, select all the pictures in them and then drag them to the August New York Trip folder.  When you let go, you will see a message:

Click on ‘Move Files’ and it is done.  Repeat with each folder that you want to combine into the August New York Trip folder.

Step three – delete the empty folders left behind: When you move all of the pictures from one folder to another using Picasa, the original folder disappears from the list.  This is because Picasa can only show you folders that contain pictures.  Since you’ve emptied the 2011-08-21 and -23 folders of all pictures, it automatically disappears from Picasa’s folder list.

But, the folder still exists on your computer.  If there are other files besides pictures in that folder then it is appropriate that it still exist.  But, as is likely in this scenario, the folder is empty – it’s a good idea to use Windows Explorer (or Macintosh Finder) to delete it.

More questions on Folders? Check out the following videos.

4 Responses to “I Don’t Want Pictures in Dated Folders”