Words do matter.  If you ask a question and you use the term ‘Upload’ when the correct term is ‘Import’ you might not get the answer you were looking for!  I see this all the time.

Let me give you an image that helps me remember the meaning of Upload and Download.  It is very useful to think of the Internet as existing in the clouds above the earth.  In reality, of course, the Internet is made up of lots of computers and cables here on the ground, but since they are accessible without regard to space or time, it’s as if the Internet is a parallel universe above the earth.  Thus the popular current terminology of ‘cloud computing’ simply means all the data your computer is accessing exists on the Internet instead of on your computer.  ‘On the Internet’ and ‘In the Clouds’ have become synonymous.  We also refer to this as Web-based. 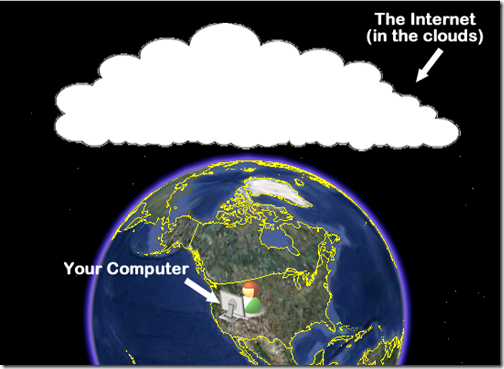 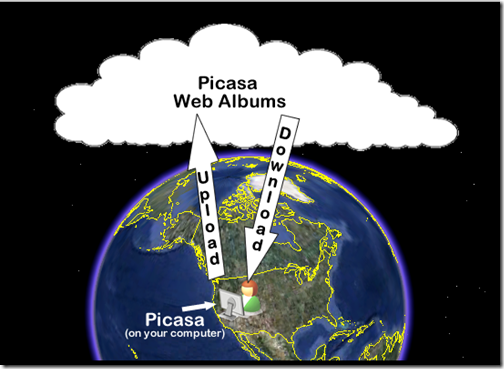 The terms are not used just by Picasa.  In general computer terminology ‘Upload’ simply refers to a direction … from your computer to the Internet.  ‘Download’ refers to the other direction … from the Internet to your computer.  Even if all you’re doing is browsing the web, upload and download activity is taking place.  When you click a link, you are uploading a request to see something.  Images you view on your browser are downloading to your browser. 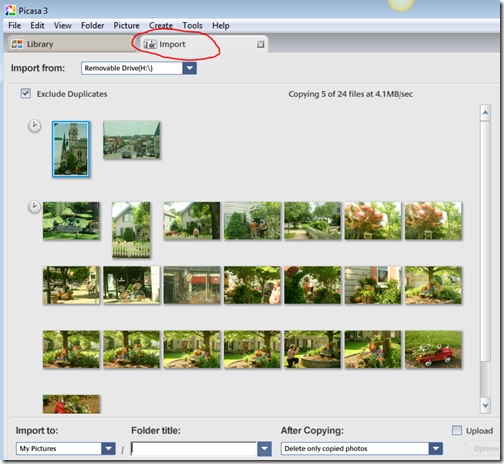 Import has nothing to do with the Internet.  Import is Picasa’s tool for copying pictures onto your computer from whatever device has the pictures.  You don’t even have to use Picasa’s Import tool if you don’t want to. For a long time, I preferred the import procedures on Canon’s ZoomBrowser.  I would use that software to get the pictures from my camera to my computer.  Once that was done, I would use Picasa to manage them.  As long as they were somewhere within the My Pictures, Picasa would see them as soon as I opened Picasa.

Remember, Picasa does not store your pictures.  Your pictures are located on your computer, usually within the My Pictures folder, and Picasa sees them there.  The Folder Manager (Tools, Folder Manager) is where Picasa is told which folders to watch – aka ‘scan.’