This past week we had a discussion on our Geeks on Tour Members’ Forum on Picasa that I thought would be good to share with all of you:

Catherine: I am trying to understand which path I should take.  If I sync and something happens to the folder on the local computer does the album disappear from the clouds.  Am I better just to upload?

I think you’ve got the idea.  Sync’ing to web makes it Oh so easy to get a folder or an album onto the web.  But, yes, if photos get deleted on Picasa on your computer, then they will be deleted on the web.  If really don’t want that then Uploading may be better.

Here’s the official word from Picasa’s help page of what gets sync’ed:

Once you’ve enabled the Sync to Web feature, you can sync the following changes from Picasa to Picasa Web Albums:

Catherine: So does this mean that if I take a picture from a folder I have synched and do something in Photoshop and save it back in the picture file it will change in Web Albums?

That would be cool but I am thinking that I might be safer uploading pictures…I do think of Web Albums as storage.  By the way, Picnik in Web Albums is really fun.

Yes, it is way cool how any editing done to a picture – even editing outside of Picasa, like with Photoshop – will be synchronized with your web album.

But, if you think of Picasa Web Albums as another form of storage – a kind of a backup – then I agree that uploading is a better way to go.

My standard procedure is still to upload my best pictures … ones I want to share for some reason.  And, although I don’t consider that a backup because they are much smaller pictures, it is good to know that if something happened to my originals – and to my backups – at least I would still have the pictures that are in my web albums.  That wouldn’t be the case for synchronized albums.

I use synchronzed web albums for special groups of photos – like our Alaska cruise.  In Picasa I have 900 pictures from that cruise in a Folder called Alaska Cruise.  Then I made an album in Picasa where I put the pictures I want to share, and I made that a synchronized album so whatever I put in that Album will automatically appear in my Picasa Web Album as well.  There are only 120 pictures in that Album.  This is great because I worked on those pictures over a matter of days – I might change my mind and decide that picture 8 was better than picture 7 – when I remove picture 7 from my local album and put picture 8 there instead, I know that the change will be automatically reflected on the Picasa Web Album.  No action, or even thought, required by me.  Same thing if I come up with a better caption for a photo – just change the caption on my local copy, and it will automatically be synchronized with the web album.

When I know I’m completely finished making any changes, I can Disable Sync – by clicking on the down arrow next to the Share button in Picasa – then my web album will be safe from anything happening to my local copy.

Bottom line – I use Sync sparingly, and only on Albums – not Folders.  I don’t synchronize folders.  I use it as a way to set up and manage an online Web Album without having to go to the web.  Kind of like being a puppeteer – I’m pulling the strings with my local copy and the web album reacts accordingly.  But I can cut those strings any time I want. 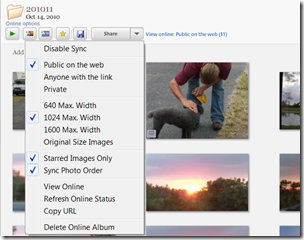 hmmm – I just noticed the option to synchronize only Starred photos – using this option, I might change my mind about not synchronizing folders!.  Synchronizing just the starred pictures in a folder sounds like a very efficient way to go.  I generally keep my pictures in folders by month – if I sync’ed just the starred photos, then it would automatically be building my Web Album throughout the month, just by starring the ones I want to share.  Then, at the end of the month, I could disable Sync.

Always learning ….
Thanks for the question!

Upload Photos to the Web

5 Responses to “Sync’ing versus Uploading to Picasa Web Albums”