How often have you just imported pictures, and the next time you sit down at your computer and open Picasa – you can’t find them?

Wouldn’t it be nice if you could just ask Picasa, “Show me those Pictures that I was just working with please.”  Guess what?  You can.

Picasa Shows you the Latest Pictures Added to your Library

It’s called ‘Recently Updated’ and it’s an automatic album.  Just look at the top of the left column, you should see it there right by the Starred Photos Album. 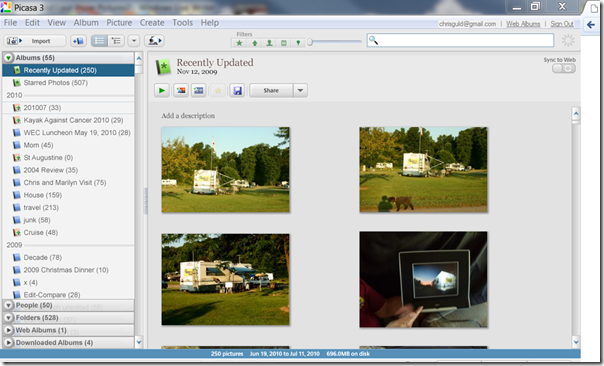 Whenever you add new pictures to Picasa, either by importing from your camera, or by making a new Collage, Movie, or Screen Capture, they will appear in this album.  I could have sworn that recently edited pictures showed up here to … maybe that was a previous version … but they don’t.  It would be more precise to call it ‘Recently Added’ than ‘Recently Updated’, but there ya go.

Remember, an Album is NOT a Folder

So, that’s the first step – you look at the recently Updated Album and you see your most recent pictures, but they don’t actually live there.  An Album is NOT a location on your computer, it is a feature of Picasa.  Think of Picasa as your picture secretary, the ‘Recently Updated’ folder is simply her way of answering the question, “What are the most recent pictures that we added to the Picture Library?”  The next question is most likely, “Where are these pictures located?”  The answer to this question will be an actual folder on your computer’s hard drive.

Locate Pictures on Disk, or in Picasa

In order to find out *Where* these pictures are, you right-click and choose either “Locate on Disk’ or ‘Locate in Picasa.’  Either one will show you what folder houses the picture in question.  The difference is that choosing ‘Locate on Disk’ will open a new window and use Windows Explorer (or Mac Finder, I presume, on Macintosh) to display the folder.  If you choose “Locate in Picasa” no new window will open up, you will simply be repositioned in the Picasa library so that you are viewing the home folder and the actual picture in question. 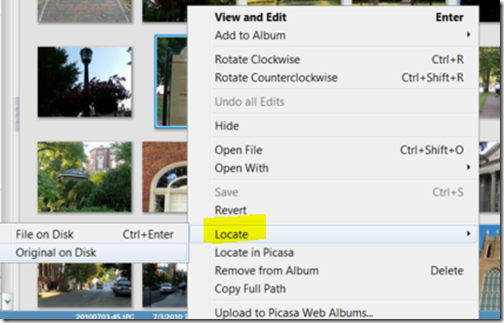 If yours just read’s ‘Locate’ rather than ‘Locate on Disk’, that means that you have edited and saved your picture.  The ‘File on Disk’ will be the edited version and the Original on Disk will be the original version that Picasa tucked away in a safe, hidden folder.

Can you Remove the Recently Updated Album?

Yes and No.  You can click on it, press the Delete key and then confirm to delete the Album.  It will disappear – all the pictures will still be located in their respective folders –  but, the album will be gone.  But, it won’t be forgotten!  The Recently Updated Album will be recreated the next time you open Picasa.  It’s an automatic album – that’s what the green color means.  Picasa thinks you should always be able to find the last bunch of pictures.  She is very diligent and will always keep track of the last 250 pictures that were added … whether you want her to or not!  So, you may as well take advantage of it and look there whenever you need to be reminded about your most recent photos.

If you’re a beginner, the best way to learn is with our ‘Beginner’s Guide to Picasa’  Only $10 for the 60 page eBook *plus* access to 2 hours of Show-Me Video linked from the eBook.

2 Responses to “Where did I put those Pictures?”