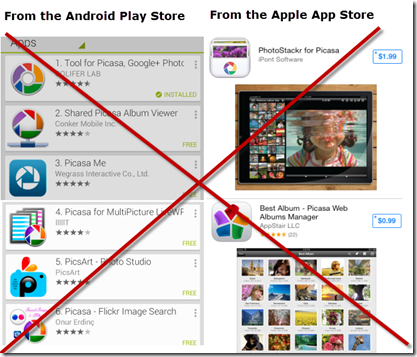 Picasa is a very popular, free program from Google.  You download the software to your Windows or Macintosh computer from Picasa.Google.com and it helps you browse, organize, edit, and share the pictures on your computer. The current version of Picasa is 3.9 and it is generally referred to as Picasa3, to distinguish it from the companion photo-sharing website known as Picasa Web Albums.

Sorry, it can’t be done.  First of all, your iPad is not intended to store thousands of pictures.  It only has 16, 32, or 64 Gigabytes of storage, depending on your model.  I have 120GB of pictures on my computer (and external hard drive) and I know many people with much more. Secondly, mobile devices like iPads and Android tablets work differently from Windows and Macintosh computers in that each App is supposed to store its own data, unlike Picasa that manages pictures stored in the computer’s folders.

All those “Picasa” Apps ARE NOT Picasa3

In the image at the beginning of this article, you see a screenshot from both the Android Play Store and the Apple App store.  They both show multiple Apps that include the word “Picasa.”  None of these are actually Picasa.   Picasa is by Google.  Take a close look at all of these Apps and you’ll see the publisher is Colifer Lab, Conker Mobile, PicsArt, iPont Software, AppStar, and more.  None of these Apps are by Google, therefore, none of them are the real Picasa.  These apps are meant to interact with your Picasa Web Albums, pictures that are stored in the Cloud.  I haven’t used these Apps, they may have some very nice features for viewing and managing your pictures on Picasa Web Albums (now also known as Google+ Photos.)  I just want to point out that this is NOT Picasa as we know it on our Windows and Macintosh desktop computers and laptops.  It’s a new world out there with cloud storage, iOS, Android, Windows 8RT, smartphones and tablets.  Picasa is from the old world of computers.

Windows 8 is even more confusing

Windows 8 comes in two flavors: RT and full-blown Windows 8.  If you are using a computer with Windows 8 (not RT), you have a Windows computer.  You can use any web browser and go to www.picasa.google.com and download the Picasa3 software to manage the pictures on your computer.  But, don’t expect to find it in the “Store.”  The store contains the new world Apps that work on tablets as well as computers.  If you open the Store and search for “Picasa” – you will find lots of matching apps.  But, once again, none of these are Picasa3 by Google, so none of them are the real Picasa. 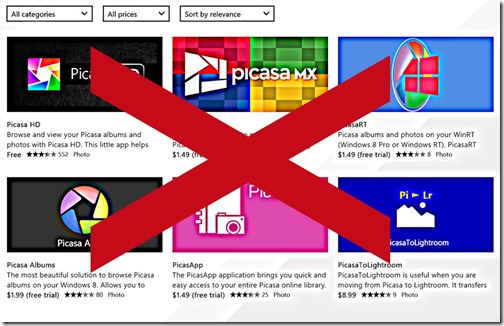 Will Google make a Picasa App for our Mobile Devices?

I wish I knew!  It’s possible, but it certainly doesn’t exist right now.  So don’t download something called Picasa and expect it to work like Google’s Picasa3 on our computers.  Read the name of the author of the App, and read the description of what it is designed to do.  Most of these Apps are intended to work with the photos you’ve already uploaded to Picasa Web Albums / Google+ Photos.  It’s up to you to know where your pictures are … on your computer, in the cloud, or on your mobile device (or all 3!)  Watch the video below for our advice on where to store your pictures.

Here is a short video about managing pictures from your multiple devices.

3 Responses to “Picasa 3 for Android and iPad? No Such Thing”